A number of years ago I was helping an organisation through a significant change, the sort that goes from top to bottom. The leadership team thought through and worried about all of the changes that we made, how they’d be received and how we explained them. In everything that we went through, from changes in structures, commercial terms and locations, the most emotive topic was a change to the structure of email addresses – it caught us out. That’s just the way it goes.

If you’re in HR in the UK, you’ll be aware of the most emotive debate since Marks and Spencer made Percy Pigs vegan friendly and in the process removed all joy from eating one. I’m talking about the CIPD’s change to the membership card.

Since I qualified nearly twenty five years ago, I’ve received a traditional membership card each year in return for my membership fee. This year, like everyone else, I received a badly typeset, plasticised piece of paper. 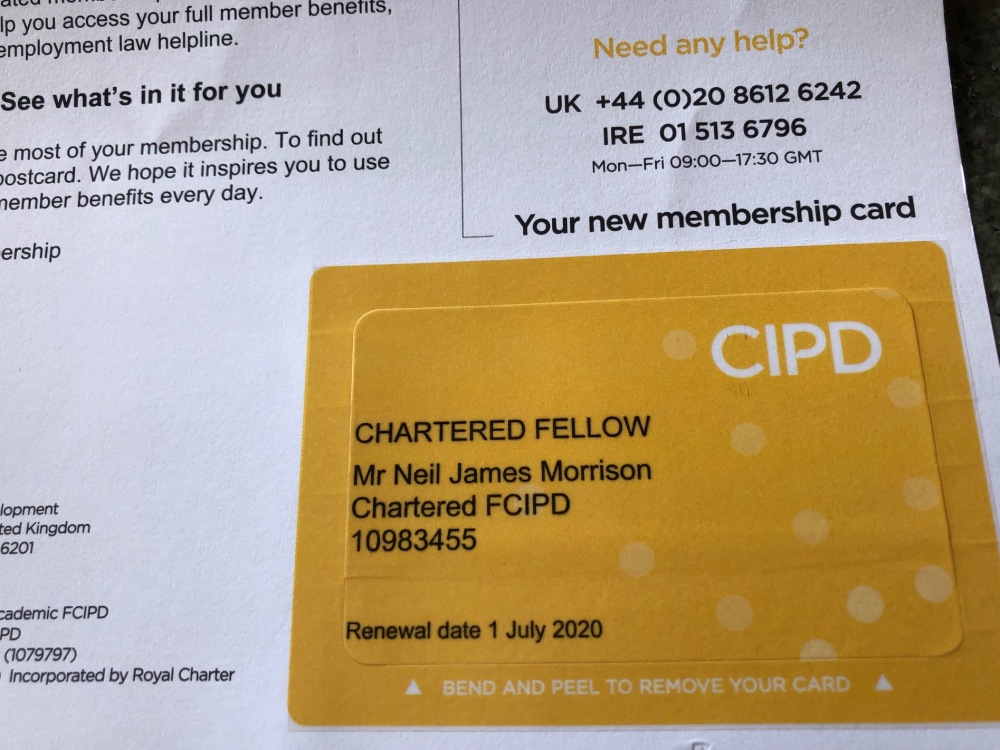 (now you know my middle name and my membership number…no impersonations please!)

The reaction to the change has been typically HR, over emotional and intellectually stunted, with an artificial outcry and rage. And in a balanced response Membership Director David D’Souza wrote this post on the CIPD website, whilst others on the same side of the argument say, “it’s just a card!”.

Which is of course true, but misses the point.

The CIPD have shot themselves in the foot with a decision that is naive and ill-thought through, even if it is in it’s essence correct. It is only a card, but for many it represents their membership. I have several other memberships to organisations that send a similar card (The Ramblers Association for example), the difference is that I decide on an annual basis whether to continue with my subscription and I don’t have to pass an assessment process or exam in order to get it.

For many, I imagine, this is seen as a representation of the value proposition of their membership. Indeed the card itself came in a big yellow envelope with the word, “VALUED” in big capital letters, dreamt up by someone who once read a Ladybird book on marketing, to make sure that members understand – they’re valued. The thing is, it doesn’t matter what you say, it matters how you feel, and in the same way that the email address caused disproportionate debate, this change has also led to a different conversation.

If the CIPD wants people to commit to membership for life, then a flimsy, disposable card (that I’m told rips on removal) doesn’t represent the messages that they’d intend. If they want people to see the institute as the, “internationally recognised gold standard for HR and people development”, then this feels symbolic of saying one thing and acting in a different way. If there is an opportunity for the institute to draw heart, it is that people clearly felt proud of receiving their previous card, even if they weren’t quick to declare it.

The environmental arguments that are put forward for the change don’t wash with me, I’m afraid. There are membership models out there that issue one card on joining and then only change it on upgrading or loss. With a bit of creativity, they could have launched a couple of different permanent cards each associated with a different management or workplace thinker for example. If you genuinely expect members to stay with you for life, then one card over a thirty or forty year career would be much more environmentally friendly than a plasticised paper one each year.

Let’s be clear, I don’t care about the card either way, reading about the debate made me go and find the lurid yellow envelope in a pile of catalogues and junk mail that I’d put to one side. What worries me more is that this seems to be the latest piece of evidence of the CIPD losing sight of the value proposition for their core membership. There are many organisations that have forgotten their core customer base as they’ve become distracted by peripheral activities and chasing revenue. Let’s hope the sensible and grounded voices at the institute can use this example as a warning sign to remind others of the risk of this happening to them.